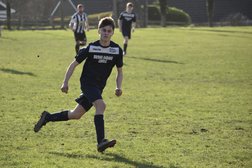 It was a difficult start to the season on Tuesday night for Llanfair Reserves, facing a strong Builth side without a recognised goalkeeper.

The game started badly for Llanfair who found themselves 2-0 down after 25 minutes. However Max McLaughlin pulled a goal back on 32 minutes, set up by Dan Morgan.

Before the half time break though, the visitors were 4-1 up, leaving an uphill battle for Llanfair in the second half.

Dan Morgan made it 4-2 on 52 minutes, assisted by new signing Tom Burlinson.

However Builth put Llanfair to the sword late on, making it 7-2.

Not a great start but our young squad with lots of new signings have plenty of time to pick themselves up and improve. Next up Bow Street at home on Friday 12th August 7pm.

Player of the Match: Matt Roberts