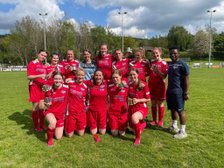 A Tale of Two Halves in Cup Final

Llanfair took a shock early lead when Sian Evans scored an own goal after only 2 minutes.

Llanfair almost doubled their lead moments later but the Aberystwyth keeper denied Tonicha Lloyd who had latched on to a through ball.

Llanfair continued to make it difficult for Aber, but the seasiders scored after 36 minutes to equalise through Gweliann Jones.

The second half was a different story. The Welsh Premier side dominated the play and a barrage of goals ensued. An impressive 6 goals sealed the cup win for Aber.

An unfortunate end to what has been a challenging season with a small squad. The Ladies can be proud of their efforts as they enjoy a break, ready to again in Tier 2 next season.

Player of the Match: Nia Ellis