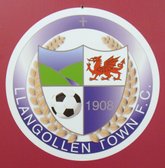 Llangollen Football Club was formed as early as 1908 but clubs such as Arosfa and Berwyn Rangers were the pioneers of football in the Vale of Llangollen at the turn of the century. The present club came to prominence in the 1950's and enjoyed success until the mid seventies, when a decline seems to have set in. After winning the North East Wales Cup in 1974 more than 11 years elapsed before they won the next real honours which saw the reserves winning the Welsh National Division 3 league in the 1984-85 season, a season which also saw the arrival of James Edwards as manager of the first team and his assistant Mel Thomas who the following season 1985-86 guided the first team to Champions of the Welsh National Division 1.
During its heyday the Club was managed by Scotsman Jim Birrell and he retained his connections with the club until 1992 when along with other committee members resigned from the club.
It was under the guidance of ex-player Chris Tobin, who took over the reins in 1992, that the club reached the final of the Horace Wynne Cup in his first season losing to Saltney after extra time. Three years later they reached the final of the same cup and won defeating Brickfield Rangers, they also won the Division One League Cup defeating Bala Town in the final and gained promotion back to the Premier Division.
Kevin Richards took over for the 1999-2000 season and completed his first season by winning the Premier Division League Cup defeating Penley in the Final 3-1. Despite showing signs of promise, the following season saw many talented players under achieve and Kevin appointed Paul Gray as his co manager. The results though were not forth coming and Paul was replaced by Bob Evans.
Damien Tobin took the reins for the 2006-07 season but resigned after only a handful of games to concentrate on his youth football commitments. Club captain Jason Davies took on first team duties for the next 12 months before work commitments again forced a change of leadership. Senior players Gareth Lloyd and Richard Jones oversaw a difficult 2007-08 season which saw a young side narrowly avoid relegation from the Welsh National Premier Division. The 2008-09 season witnessed a complete overhaul of the club structure and the formation of a Colts team, under the management of Gareth Lloyd and Richard Hughes the first team recruited several players from higher divisions in what turned out to be a successful season winning the Welsh National Premier Division League and also runners-up in the league cup which exceeded all expectations.
Winning the Welsh National Premier Division resulted in a step up to the Cymru Alliance League which was the first teams' debut in the second tier of Welsh football for the 2009-10 season. Despite finishing in a respectful 11th position out of 17 in the league, due to restructuring of the league the first team were relegated back to the Premier Division of the Welsh National League. However the 2009-10 season was a successful one for the reserves who won the Welsh National Reserves Division League Cup under the guidance of management duo Derek Booth and Bob Evans beating Rhos Aelwyd Res 3-2 in the final.
2010-11 season saw more changes at the club with the management duo of Gareth Lloyd and Richard Hughes stepping down and Derek Booth being appointed first team manager, also the withdrawal of the Colts team from the league. Due to the majority of the 1st team moving on virtually the whole of the reserve team had to step up to the 1st team in what was thought was going to be a season of consolidation more than anything else. However due to personal commitments Derek Booth had to stand down in January 2011 and Gareth Lloyd and Richard Hughes stepped back into the fold and helped to steer the 1st team towards finishing a very respectable 9th in the league. Unfortunately the Reserves had to withdraw from their division mid-way through the season due to lack of playing staff.

Hopefully this season the form that was shown in the second half of last season can be carried forward into this season especially with the majority of last season's team re-signing for the club and also the Reserves re-forming.