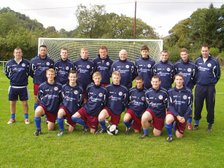 Town made it 5 wins on the bounce to continue one of their best ever starts to a season . With key players Dooley Prosser Lunt Doyle and Sion Hughes all missing the game the Llan faithful could have been forgiven for a small degree of pessimism before the kick off .

An even enough start to the game followed with both sides trying to play football the right way without managing to get a stranglehold on the game . The visitors forced a number of corners in the early stages and it was from this source that they took the lead . An excellent save from Richard Ackerley from Ian Croppers header was turned in at the second attempt by the ever dangerous Aurelio Gomez on the 12 minute mark to break the deadlock . The goal spurred the Town out of their shell and they begun to exert some pressure on the Rangers rearguard . A free flowing move involving Kevin Roberts Josh Langford and Craig Salisbury created a great chance for Grindley from the edge of the box but the shot was blazed over .
The equaliser arrived after 27 minutes when Langfords inswinging corner was met by Sam Marrs who glanced a header across goal and in off the far post .
straight from the resulting kick off Ackerley had to be at his very best to deny Gomez netting what seemed to be a certain goal from inside the area .

Llan took the lead within a minute of the second stanza when an expertly threaded through ball saw Marrs released to slot home a well taken goal . Rangers equalised from the penalty spot minutes later when a rash challenge from full back Danny Weir was rightly penalised . It was Gomez again who cooly slotted home the kick to level matters again .
The frantic start to the second half was not over and when the ball fell to Langford in the Rangers box he showed a cool head to produce a composed finish into the far corner of the net .

For the last 20 minutes Llan found themselves on the back foot and only a combination of poor finishing and the heroics of Ackerley prevented them from further adding to their afternoons work .

All in all a satisfying win against one of the more consistent sides we come across each season . The strength in depth of the division this season is best emphasised when a team of Hawardens ability find themselves with only 6 points on the board to show for their efforts thus far .