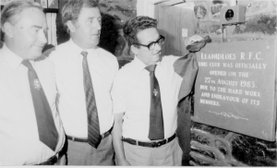 Llanidloes RFC was formed in 1975, in response to appeals to play rugby by young men returning from a Scotland v Wales International that year. The first team began with 17 names and arranged its first fixture against a Welshpool 2nd team on the last week of the 1974/5 Season. Our HQ was the Angel Hotel and we had the use of a playing field at the Garth Farm, 2 miles from town. The first committee was formed during that year, with Dr H Graham Davies, an ex International, as our first President and Glyn Johnson as Chairman.

During the following years development of the players was ably assisted by a new sports teacher called Wyn Parry and the arrival of Dyfed Lewis. Within 5 years we then moved the playing field to Dol-llys Farm, which was on the outskirts of the town. The present Clubhouse, which was the old National School building, was then acquired thanks to a Sports Council grant and was officially opened on 27th August 1983.

Now thanks to generous grants from Sportlot, The Sports & Arts Council and Powys County Council, together with many other benefactors, we have been able to acquire our own ground at Cae Hafren. Extensive ground works and changing facilities were constructed on this site, which was opened in August 1997 with main floodlights arriving the following year. We have since acquired a further pitch and a mini pitch together with training floodlights. In May 2004 we opened a covered stand capable of seating nearly 100 spectators. This venue is now a recognised centre of rugby for Mid Wales and is being used for major fixtures and festivals. We were proud to entertain our first visit by an International team when Wales A trained at Cae Hafren in 2000. We were visited by the Scarlets in 2003.

The Club was eventually, after two previous attempts, given probationary WRU status in 1998 and was promoted into the North Wales District League that year. We are now pleased to announce that we were approved as a full WRU registered club in July 2001. In the same year, following a recommendation from the WRU, the Club changed its status from a Members Club to that of a Society registered under the Industrial and Provident Societies Act 1965.