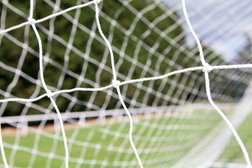 On Saturday 12th December we made the long journey south to take on Hay St Mary's FC. Missing from our side were Chris Aitkin, Dan Kelly, Wayne Austin and Gary Meredith. Due to heavy rainfall, there was a doubt if this game would go ahead but on arrival and following a pitch inspection by the match officials, the 'second' pitch was quite rightly, deemed playable. Having won the 'toss' we elected to play down hill with the strong wind behind us. From the off we pressed hard and did not allow the home side to settle. They were forced to defend deep and we were well on top, creating chance after chance and it was Marc who broke the dead-lock taking his opportunity well, giving the home keeper no chance. Again we kept up the pressure and goal number two soon followed and it was again Marc who scored - cutting in from our left, hitting an un-stoppable strike over their keeper and into the far top corner. The home side were dangerous on the break and had a decent chance to halve the deficit but their forward pulled his shot wide of the post to Connor's relief. Our mid- field were on top and kept driving forward and a through ball was played for Iwan to latch onto, confidently beating the keeper to put us three up. Kieran also had a half chance but his well struck shot hit the up-right. However with half time approaching, a long defensive clearance up the middle from the home side split us wide open and their forward ran through to beat Connor with ease. 1 - 3 at half time. With the second half underway and with literally a few minutes on the clock, a deep cross to the far post found their number 10 who confidently took his chance and made it 2 - 3. Llan however were not panicking and continued to take the game to our opponents and had a few good chances to add to our score-line. But again and from a defensive lapse of concentration, we allowed their centre forward a chance which he gratefully took - 3 each and game on. We changed our shape slightly and this worked as the expected pressure from the home side did not materialise - in fact it allowed our mid field to push forward. Iwan was by now looking very dangerous and their defence could not cope with his pace and he was well supported by Marc's trickery. Our fourth goal came from Iwan who collected the ball and took on their defence before shooting past the stranded keeper 3 - 4 - his brace. Fifteen minutes from time a delightful ball was played into their box and it was Marc who read the situation and cut across the centre half to nip the ball into the net, our fifth and his hat-rick (mom performance). They did not have a response but from us conceding a needless corner in the dying seconds, we failed to deal with it and it was left to the home player to tap into the net 4 -5. Defensively we definitely need to tighten up as we are shipping in too many goals of late. A good deserved three points and all of our 14 players played their part, in very testing weather conditions. This game was also played in the right spirit of the game with both sets of players being fully committed in competing for every ball and was well controlled by the referee and his two assistants - a credit to Spar Mid Wales football. Thanks also to you supporters - always appreciated by your players.
The Management Team