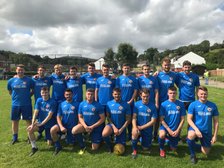 Third defeat in a week

The first team were back in JD Cymru North action on Saturday when they entertained Buckley Town. Again conditions were difficult with a strong wind and a heavy pitch. Llan had a chance to open the scoring in the first minute. Dan Graham playing Iwan Matthews through only to see his shot comfortably saved by the keeper. On 11 minutes the returning Connor Lee made a good save from a shot from the edge of the box. The game then became a bit of a midfield battle with no clear cut chances being created. On 31 minutes a cross from Iain Edmunds was headed wide by Matt Willaims. Buckley then broke upfield only to be thwarted by an excellent last ditch tackle by Khyam Wyton. On the stroke of half time Llan had a strong shout for a penalty turned down. Joe Vaughan made a strong run into the penalty box only to be bundled over.

Buckley opened the scoring on 52 minutes with an excellent finish from the centre forward. Llan responded well - a Iwan Matthews shot was blocked while Khyam Wyton saw his shot sail over the bar. Llan were back on level terms on 66 minutes when Dan Graham turned in the box and produced an excellent finish. Again the game came a battle with no clear cut chances being created. Then inside the last 5 minutes Llan pushed forward looking for the winner only to be caught out on the break. The quick break resulted in the award of a penalty. Despite Connor getting a hand to the penalty he was unable to keep the penalty out. Buckley then managed the game well and saw out the game without any further scares.

A tough pill to swallow in a game that a draw would have been a fair result. Next week we go to an improving Porthmadog with a number of faces returning from suspension and injury.