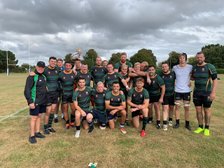 Pace was the key today and boy did the Pumas run!!

Opening day of the new season but same result!!! A Puma win in the Hampshre Plate (Round 1)

The new facilties at the Southampton University Ground at Wide Lane were a long way from our manor, but they were fantastic and suited our style of rugby. Fast, faster and exciting!!

Joe Bennetts, Iain Fraser, Toby Wilson, Lewis Heathorn and Simon Dredge all made their Puma debuts but the team gelled straight from the kick-off.

The visitors today, Aldershot and Fleet play in Hampshire 3 and face the Pumas 2XV in a months time, but today the gulf between the two 1XV was too wide.

The Pumas controlled a lot of the possession and where possible released a try hungry backline to out pace the opposition. The backs from 9-15 showed how they were puting the pre-season training into effect running good lines. Sean Nuttall, Toby Wilson and Simon Dredge used their pace to score a number of well executed tries.

However, pace was also found in the forwards and the work they have done on their fitness in the pre-season, again was telling. The scrumaging and lineouts worked well but the individual carrying by the backrow of Jonathan Elsmore, Will Quigley and skipper James Campbell was exciting to watch. The front five continually backed them up also running good lines to break down the Aldershot and Fleet defence.

Fullback Robbie Connell also had a fair day with the boot with 6 conversions added.

Chairman George Winch added - "It is the cup and anything can happen but not only was the gulf a bit too wide for the visitors to match but our game day preperation helped by new Team Manager Cliff Williams was excellent. It shows that we are well organised club focused on our rugby".