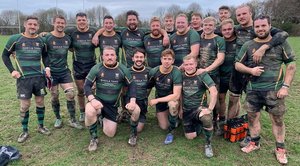 Four tries and a bonus point win elevated the Pumas to a 6 match unbeaten run and continued to see them move up the league table.

However, the opening 20 mins of the match saw Romsey start strongly and come with a game plan of taking the fight to the forwards. Their strong running No8 and No6 flanker continually tried to batter their way through the Pumas defence which for the first 20 mins of the match held firm.

After soaking up the pressure the Pumas (like in previous matches) went up another gear and scored 3 converted tries in a blitzing 16 mins. Scrum Half Iain Fraser opening this tap when great scrummaging by the Pumas forwards saw them get good field position just inside the Romsey twenty-two. Working off the base Iain out run the Romsey defence and broke a final tackle to score on 24 mins. Romsey tried to come back but basic mistakes in and around the tackle area saw Puma lock Charlie Ford tackle in the Puma twenty-two and knock the ball lose only to gather and run up the side-line and put away prop Rob Hylands who sprinted up the line and make a fantastic pass to supporting winger Toby Wilson who broke two tackles to power 40m in under the posts. With Romsey in a state of shock the Pumas again continued to power on through the forwards setting up good field position and with a ruck, the ball fell lose and returning from injury No8 Jonathan Elsmore fell on the ball over the line for another good score. The half finished with the Pumas 21 - 0 up and in full control of the match.

The second half was more of the same with Romsey trying to play but the Pumas defence holding strong. The Puma backs though were also able to attack and Centre Sean Nuttall scored a try out wide on 55 mins following the Pumas continually recycling the ball and winning a series of rucks. Scrum Half Iain Fraser let the ball go along the line where the Pumas backs stood their opposite number up committing their defence and with great handling put Sean in at the corner to win a well-deserved bonus point.

Romsey picked up a consolation try in the last 4 mins of the match which denied the Pumas a complete shut out. The match finished 26 - 7 and again the Pumas to took their unbeaten record forward. Despite allowing Romsey a final score the Pumas always looked in full control of the match. Their defence again won them the match as they denied Romsey to get any real attack going. Man of the Match was scrum-half Iain Fraser for his continued running at the Romsey backrow keeping their main threat occupied. It was good to see Jamie McTaggart and Jonathan Elsmore back from injury and Rob Elsmore make his 1XV debut this season after some time away.

It was a good match to watch and the Pumas go to Gosport and Fareham next week looking to again extend their unbeaten record.