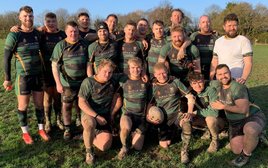 It is now clear that the Pumas 1XV are enjoying a great run of form as they have a wealth of talent to choose from within the Club. Selection is getting tougher, but it is balanced out against the opposition we are to face and choosing the right squad to meet the match in front of them.

Over the past few weeks the Pumas have looked impressive in all of the 10 matches just played. There is a great maturity on display and the desire to attack, be patient and execute the game plan. Today’s match v the Medics was tough. As in the first part of the season the Medics soaked up a lot of pressure but were always very dangerous on the counter attack.

The opening 10 mins of the match saw the Pumas win the ball from the kick-off and put together a long run of phases building an attacking platform step by step. The Medics stole the ball a few times but could not get out of their twenty-two as they were very much against the strong wind moving across the pitch.

But with patience comes reward. The Pumas opened the scoring with a great try scored by Gus Flack. Several phases where the forward continually recycled the ball saw it moved outside to the backs. The ball found its way to Gus and he stretched for the line crashing between the defensive centres.

The Pumas kept up the pressure for the next 20 mins dominating up front and looking to run where they can. The Medics defended deep but well and when they did secure the ball they broke quickly. On 27 mins they broke and got inside the Puma twenty-two and against the run of play organised a score to level the match 5 - 5. But they failed to capitalise further as on 33 mins Puma lock Kent Streek found himself in receipt of the ball 10m out following again ruck after ruck from the Puma forwards. He beat his man with strong running to score and bring the Pumas a half time lead of 5 - 10.

Both sides knew the match was going to be tight and the second half brought one converted try each. The best of these came from the Pumas when flanker Sam Floyd finally got outside his man off third phase ball and beat the inside centre just on the halfway line. He made good yards and committed the covering flanker before finding a pass to Puma centre Sean Nuttall just outside the twenty-two. With still a lot to do Sean threw a great dummy pass to fool the full-back and just reach the try line before the covering winger could put in the tackle. The try gave the Pumas a 12 point cushion and they managed to hold out to close the match 12 – 17 with the Medics scoring late on.

The win takes the Pumas to an impressive 10 match unbeaten run. All the squad played their part in a tough win and now with a week’s rest they can look forward to their biggest game of the season versus Overton away. Destiny now remains in their hands as the Pumas have to play the 2 clubs above them with only 4 points the difference. Hampshire 1 is proving to be a very competitive league and the Pumas are relishing the challenge.

No1s to be worn