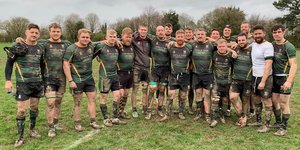 Pumas go top of the League!!

As wins go this was not the greatest performance but the Pumas squad worked hard to beat a Ventnor side who made a real game of it. The win takes the Pumas to the top of Hampshire 1 with a now 11 game unbeaten record. With other results going in the Pumas favour Chairman George Winch says "It was a tough game. The conditions were tough in parts and the strong wind made the ball going to hand difficult. But as a squad the Pumas can be proud that whilst not quite the performance of where we want to be, winning key games and getting a bonus point is critical as this league is very tight with only 6 points between us and 5th place.

The Pumas started strongly and opened the score through hooker John Pearson inside 2 mins. From a ruck just inside the visitors twenty-two lock Jamie McTaggart went on a run and fed John in at the corner.

But Ventnor were disappointed and rather than fold under pressure from the Pumas over the next 15 mins they started to run more through their backs to try and get into better field position. With wet slippery conditions the Pumas defence seemed a bit off and on many occasions Ventnor broke the line before the cover tackling came in. On 23 mins they got into the Pumas twenty-two and rumbled the ball through their forwards to score a converted try and lead 5- 7.

With the wind against them the Pumas kept trying to break though the Ventnor defence, but the visitors stood up well and closed the half out with the lead.

Some tactical changes were made at half-time and the Pumas started strongly with the forwards making Ventnor work hard. on 47 mins the Pumas were awarded a scrum 7m out and they pushed Ventnor all the way across the line to score a converted try through Jamie McTaggart bringing them back into the lead 12 - 7.

But Ventnor were not finished and kept pushing the Pumas back and scored a converted try on 63 mins as the Pumas missed a few tackles and went over from the break at a ruck. 12 - 14

I don’t know what was said under the posts, but the Pumas started to rally and make better decisions with and without the ball. Breaks from the base of the scum kept Ventnor guessing at where the attack was coming from and the defence became much stronger. With 12 mins on the clock flanker Sam Floyd was quickest to the ball in the middle of the field following a disruptive tackle. He kicked through and controlled the ball to touch down over the line and bring the Pumas back into the lead 17 - 14.

But points meant everything to both sides, either bonus or losing points and it was the Pumas who got the bonus point through winger Robbie Connell scoring out wide with the last play of the match and close the game 22 - 14.