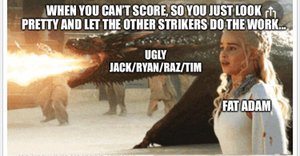 Fat Adam was away so the strikers can play

Fat Adam was away this week, providing a prime usurping position for VC Greg.
Team talk finished, aerial assault the prime tactic, a reinvigorated 4s team proceeded to the pitch, leaving Joe in the background suffering ‘back spasms’ – later to be found out as a slipped disc after a swift trip to a and e.

12 noon hits, Eds pass straight to the Spaniards in an attempt to tease them into a false sense of security.
The first half filled with high intensity hockey, with both sides pushing high presses and maintaining good ball possession.
For the first time in 4 years, training seems to be paying off for the 4s.
Rhino, after watching the “Watto and Ugly Face reverse masterclasses” gives one a go. Rebound after rebound the ball finally falls at Tiny Pipes’ feet, who manages to totally outfox the keeper and push one past him.
1-0.

Great half-time talk from the man who wears the trews.
Eds push forwards hard into the second half.
Charlie decides to bring a new tactic to the game, having not been at training recently. Passing the ball directly to the opposition striker, they appear on goal. Shot taken – no other than the Great Wall of Colchester blocked it on the line, surely a shoe-in for MoM.
Eds push forwards once more, earning a short corner. A great routine with “five-finger-forehead” Steele attempting to break someone’s face on the line. Second short awarded and after another discussion and change in tactic, grandpa Charlie decided to use the corners of the goal rather than the middle.
2-0.
Spaniards were quick to retaliate, breaking through our field and slotting one into our bottom corner.
2-1.
Time to put the game to bed. Raz broke the line with the rest of the forwards, putting a classic three-man weave into tactic. Pass after pass, defenders were eliminated, one-by-one. Finally just the keeper stood in the way. Raz quickly created 43 memes that broke the keeper emotionally, causing him to immediately subside. Raz walked the ball into the net.
3-1.
Like a good tennis match, the Spaniards were swift to respond with a crack of a shot from top D, releasing the ball into the Eds net.
3-2.
IT Dave, equipment and communications manager stepped up. Another decent attack from Eds sees the ball thunder against the keepers pads, looping up into the path of our formidable blockchain expert. With Dave’s head momentarily out of the cloud, he saw an opportunity to exercise some wonderful 3D skill, popping the ball past the keeper’s firewall and straight into the goal-wide web.
4-2.
At this point, Charlie decided this would be a great opportunity to make the last 2 minutes of the game a nail-biting finish. So he passed it straight to the striker who slotted it cleanly into the Eds goal.
Final score 4-3. 100% win record for Greg Murdoch.

Joint MoM: Tiny Pipes Ugly Face Jack for some excellent work ethic and a well-worked goal and Rhino for a big-game performance which was not replicated in his post match pint performance.
DoD: Charlie “five-finger-forehead” Steele for responding to his agoraphobia by passing to strikers.