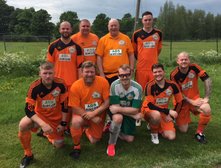 A small band of LBFC brothers came together, to participate in the 7-a-side Charity Tournament , COXON CUP, run by Rutherford AFC, A great day out.

Team; Chris Saunders, Paul Charlton, Dave Glister, Jack Norris (2 Goals), Dave Heatherington,(1 Goal) David Short (2 Goals), Tony Woods (2 goals), and young Melvin
As always after a 5 v 0 victory, the typical cocky ex Bull lost the next 2 and did not make the Semis. That said it was a great afternoon, making old acquaintances and new, some players played as far back a 2008 and others just 2016. But the Band of Bulls played some great stuff with their new ex LBFC brother's. think we might do it again !
Share via
FacebookTwitter
https://www.pitchero.com/clubs
Recent news