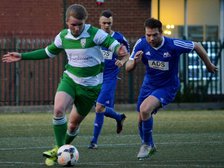 This games had been postponed for 5 weeks, with neither side playing any football in November, so a decision was to play on a G4 neutral pitch to finalize a result. The game was played at Gosforth Academy with a 3pm KO under floodlights.
All though the surface was good the weather was still appalling, for the players and supporters. 50 mph wind in driving rain. Not for the faint hearted.
Both teams played good controlled, patient pass football, considering the wind, HEXHAM where showing good movement and aggression, But Bulls defence looked un-phased and solid. As Bulls midfield of Scope, Short and Robson began to control the game the home team where on top.
The dead lock was broken after 31 minutes, when ADAM SCOPE brought the ball under control 40 yards out and drove a right foot shoot over the keeper and into the net 1 v 0.
5 minutes later Bulls Keeper MICHEAL ROBERTSHAW, made a world class save from the visitors Center forward, clears the ball down the pitch, overlapping right back TAYLOR plays a superb cross into the box for CHRIS SWORD to leap and head into the net. 2 v 0,,
Bulls on top now, on 39 minute DAVID SHORT 30 yards out, side steps his marker drivers a bullet of a shot to hit the top left corner of the post and into the net 3 v 0.
Bulls controlled the game from then on, even after the visitors No 9 pulled one back, In fact the Bulls could have scored a further 5 goals but sitters where missed.
So Final Score 3 v 1
Adam SCOPE man of match
Next Northumberland CUP opponents Seaton Burn Away
Share via
FacebookTwitter
https://www.pitchero.com/clubs
Recent news