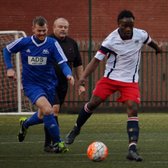 Bulls march into NFA Cup Qtr-Final, after a 3 v 2 thriller against Seaton Burn. 2 Goals from Adam Scope and a last minute winner by Kerian Dewhurst

Again due to weather Bulls played on a 3G pitch at Gosforth Academy, against Seaton Burn FC, a team that the Bulls have had issues with in the past. Early on a few chances by each team came and went. Bulls started to get on the ball more and create more chances, On 16 minutes, Scope played a ball into Seatons box for Walsh to run onto, but he was pulled down in the box 'Penalty"
Adam SCOPE steps up to take it. 1 v 0. Bulls on Top, but a defensive error allows Seaton Burn in to level 1 v 1.
H-T 1 v 1
Second half saw Seaton Burn have more chances, but failed to score until 15 minutes from time, when in a goal scramble is poked over the line . 2 v 1
This sparks the Bulls into action, Short goes up Top to lead the line, On 84 Minutes, ball played into Short, Controls it, holds off defender cuts inside to roll a pass to the on running Adam SCOPE , who drives it from 25 yards into the roof of the net. 2 v 2
game on. With one minute to go, Adam SCOPE takes 35 yard free-kick shot which the keeper can only parry out for Kerian DEWHURST to slot in from four yards. 2 v 3. Seaton kick off, whistle goes, Bulls win the Cup Thriller 3 v 2
Man of the match awarded to Adam SCOPE
Bulls away to Gosforth Bohemians in the last 8 of the Northumberland Cup
Share via
FacebookTwitter
https://www.pitchero.com/clubs
Recent news