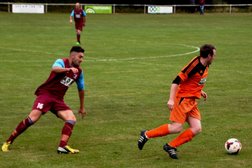 The Bulls earned their first point in a 1 v 1 draw at home to Gosforth Bohemian's a well established and accomplished team. Steve Thompson(1 goal)

The Bulls first home fixture in NFA League Div 1, saw them play host to Gosforth Bohemian's a well established and accomplished Division 1 side. Steve Thompson transferred in from Grainger Park was the debutant and a fit again Paul Hunter made his return to the starting line up. Coach, Peter Wells was in charge of team selection, based on player availability and the known opposition tactics selected to start with a 3-5-2 formation,.
Back 3 of Dewhurst, Thompson and Hunter- 5 man midfield with Harvey Lockwood and Matty Dawson respective wingbacks- Kane, Robson and MacDonald centre and Brown and Short leading the line. It was also nice to see a quality 5 man bench to back up the first 11.
Team Captain Short won the toss and kicked towards the bowling green end with the sun at their back.
This was a entertaining game both teams showing quality skills and passages of play. The Bulls showing they can play at this level.
Both teams had early half chanced with Anth Brown hitting the bar, but it was the visits who had the best chance of the game. A Penalty !!
Matty Dawson rashly upended the Bohemian winger in the Box, penalty missed, hit the post and bounce out. ! Dawson was a relived man and luckily went on to put in a good workman like shift.
Dead lock was broken on 37 minutes, when Kane whipped in a corner from the left to see STEVEN THOMPSON, rise like a salmon at the back post and power a header into the roof of the net 1 v 0.
The visitor rallied and had chances to level but squandered them.
In true Bulls fashion , 5 minutes before half time in control, playing well a defensive error with a back pass let's in the visitor centre forward to equalise 1 v 1
Half-Time 1 v 1
The second half was much the same as the first, good entertaining football from both sides squandering more chances, that said Philp SHARP in goal made 3 excellent saves, as did the visiting keeper.
END 1 v 1
DAVID MacDONALD was awarded Man of the Match
Share via
FacebookTwitter
https://www.pitchero.com/clubs
Recent news