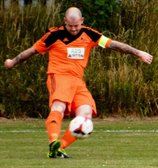 Defensive weakness and poor performance cost the Bulls another defeat. With a 1 v 1 score most of the game, the Bulls defence fell apart last 15"

LONGBENTON hosted PONTELAND UTD one of the teams tipped for promotion to the premier this season. First half saw the bulls match the visitors hitting the woodwork twice. The visitors took the lead with a punted through ball over the defence for bulls ex striker, CONNOR GRAHAM to lose his mark, Robson, run on and score, keeper no chance, The Bulls battled on, against some strange referee decision's. On 41 mins, the Ref actually awarded the Bulls a free Kick 30 yards out left of centre. DAVID SHORT, took the dead ball kick and from 30 yards curved a perfect ball into the top right hand corner of the net. 1 v 1.
H/T 1 v 1
For most of the second half there was not much to separate both teams. However, 15 mins from time the visitors no 7 ran at the defence from the halfway line and scored, minutes later he did it again like a knife through butter. 1 v 3 game over, Ponteland scored a fourth in the last 5 mins 1 v 4. The Bulls defence just collapsed in the last 15 mins...lessons learnt we hope.
Final Score 1 v 4
Share via
FacebookTwitter
https://www.pitchero.com/clubs
Recent news