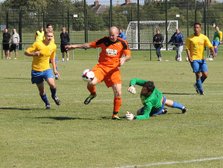 Away to Blyth Isabella, League champions 2 seasons ago was not going to be easy. The
Bulls started with their usual predictable 4-3-3 formation, with capt David Short having to play
CB due to no CB available , in any event, the Hosts 4-4-2, with a solid back four dominated the first half with Brown Isolated most of the game.
3 v 0 at HT, looked like a thrashing on the way.
But Coach, Peter Wells changed tactics, to 5-3-2. Short going up front with Brown, Robson into back 3, Woods and Charlton
Wing backs. This changed the game and the Bull started to dominate and create chance. Forward balls to Brown and Short where held up to support midfield and wing backs getting forward. On 56 mins ball into Short's feet flicked wide for Brown to run on to and crosses first time for ROB WOODS to score on 6 yard box, well taken, simple worked goal.
71 mins Ben Robson dribbles into the box just about to score when defends leg blocks him, however, DAVID SHORT picks up the rebound runs wide of the keeper to slot in the net. 4 v 2,.
Still on top 6 mins later, David Kane , plays direct ball into DAVID SHORT'S feet, one touch, second touch a goal 4 v 3. DAVID SHORT 99th goal for the Bulls
The hosts are rattled, gets a bit confrontational. But the hosts hold out for a win.
On the balance of play a draw would not have been under fair to either side.
Man of the Match DAVID SHORT.
Share via
FacebookTwitter
https://www.pitchero.com/clubs
Recent news