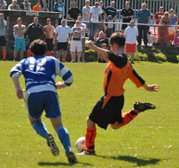 The Bulls gave the title Hopefuls a fright and should have won all three points, early goals Lockwood (15) and Adamson (21) only needed 3rd to win it

The Bulls gave the title Hopefuls a fright and should have won all three points.
At 2 v 1 up early goals from Harvey Lockwood (15) and Dylan Adamson (21) had the game there for the taking and a 3rd goal would have done it. But with injuries and Bulls 4th game in a week they just couldn't get over the line and the UNI scored the winner in the last minute of the game. Never the less, this was an excellent team performance from the bulls against a top side who will be promoted to the Premiership. Back to a 433, with a strong midfield of MacDonald, Short and Kane and front 3 of Walsh, Lockwood and Adamson the hosts could not cope with the Bulls attack and know they were lucky to survive this one
Man of the Match was awarded to RICHARD CHARLTON
Share via
FacebookTwitter
https://www.pitchero.com/clubs
Recent news