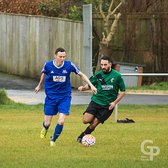 The first game for a newly reformed Longbenton Fc. Was one of the toughest we could of asked for, against a Bedlington team who have scored alot of goals this season and were unbeaten for a long period at the start of the season and has one of the league's top scorers in the team.

The game didn't start well as a mistake from the keeper cost the first goal.

It was evident that the players had not played together and some not for a long time as going forward longbenton created chances with Fishburn forcing the keeper into 2 saves and had one cleared off the line.

Defensively the team suffered as no training yet and still getting to know one another. 7-0 down at HT

Second half change of formation and longbenton came out and got a goal back with an assist from David McDonald and Fishburn scoring with a lob.

Majority if second half longbenton matchd Bedlington and only conceeded when the legs had well and truly gone.

The players were in good spirits come full time and there is a good base to build on.... next up Cullercoates a hard test.