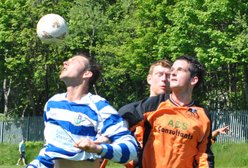 Longbenton FC's best display so far saw them just edged out by the visitors by the odd goal in 7 in a Thriller!. Late visitors goal sealed the game.

Report by Keith Thompson:
Longbenton FC went into their 3rd game with a stronger squad. Playing against manager Keith Thompson's previous club Wallsend BC seniors. This had the makings of being a tasty affair due to recent events but both managers keen to focus on the football as after all football is what matters.
Longbenton gave debuts to nearly half the team due to the building of the squad. With Gareth Vincent, Steve McClane, Richard Charlton (Ex Bulls) and Scott MacDonald.
Longbenton also sporting their new home kits sponsored by the Geordie Banger company.
A minutes silence was held before the game for local non league legend Robbie Livermore who tragically past away a few days ago. A player and gent of the highest quality. RIP.
The game started fast and the bulls nearly took the lead early on with the first attack. With the bulls looking a bit nervous on the ball and giving possession away the first 30 mins of the game belonged to Wallsend BC. Who scored through George Lindo which was questionable as even though Lindo wasn't offside, Stephen Buzzeo was and he knocked the ball up for Lindo to head home. 1-0. Wallsend soon went 2-0 up when Dale Amos was dispossessed and Connor Walker drove though the gap and finished with a drive into the far corner past Martin Dixon, who had been in fine form with some fantastic saves. One in particular which was tipped onto the bar from a top corner bound shot from Brad Walsh.

A change to formation at half time for Longbenton saw Scott MacDonald drop into a 10 role and Matty Cartwright and Jack Fishburn move to a front 2 to give more bodies in the midfield. This paid off as the bulls put the pressure on the WBC defence exploited the lack of pace from substitute Dan Whitfield who was making a few fouls and giving away free kicks in dangerous areas. The goal came from one of the free kicks as Fishburn was fouled about 35 yards out and Tony woods hit a hard free kick which I squirmed past Dan Reagan and it was 1-2. This seemed to knock Wallsend and the bulls gained confidence and pushed forward for a second. It was long before it came. Again another free kick, this time though down by captain Steve McClane and Michael Clark swept home from 8 yards. 2-2.
It looked like there would only be one winner at this point and Longbenton pushed forward but could not find a break through. The bulls were starting to get leggy and the introduction of Charlie watson and cal Lawson put longbenton on the back foot and were caught on the break with counter attack and Charlie's Watson slotted home after Lindo broke away to cross the ball. 3-2.
Subs made for Longbenton saw Tom Illingworth and Scott MacDonald come off for Adam Illingworth and Dan Johnson to come on. At this point the lack if game time for the bulls was starting to show. Again wallsend pushed to finish the game and a goal line save from Dixon was fired home on the rebound by Cal Lawson. Longbenton heads did not drop though. As there was an instant response. When Matty Cartwright made it 3-4 from the edge of the area. In the 5 mins both teams looking tired WBC trying to take the ball in the corner to seal the points and longbenton trying to get forward claim a point. The game finished 4-3 to WBC.

Fitness was the difference in the game as Longbenton looked like they would win the game until the last 15 mins with some on the sidelines saying the bulls won the physical battle and there was no shame in this defeat for a team that only had its 3rd game against a very high caliber opposition. The bulls certainly proved they can compete in this division and with a few additions can push on.

Man of the match
Richard Charlton

Next up Blyth Spartan Reserves at High Flatworth