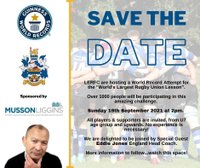 Guinness World Record attempt with Special Guest Eddie Jones.
On Sunday 19th September at 2.00pm, Long Eaton Rugby are going for the largest single training session in the world. Currently 720 people in Japan. We are going for 1000 for a 30 minute lesson.
As part of the fundraising for the Clubhouse Extension, the whole rugby community is coming together for the challenge. England Head Coach Eddie Jones has confirmed his attendance, and more names to follow in the coming weeks.
Later in the week we will start collecting names to be part of the World Record. Keep your eyes peeled for further updates.......
#ONECLUBCOMMUNITY
Share via
FacebookTwitter
https://www.pitchero.com/clubs
Recent news