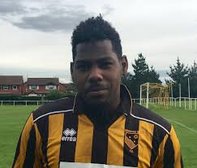 Soloman handed a chance to Impress at Longlevens

Donald Soloman switches from Tytherington, given a chance to impress with Longlevens.

It's been a strange season so far for Donald Soloman. Starting the season as captain of Tytherington Rocks in Hellenic League Division One West, you'd not be far from the mark in saying it wasn't really the start he would of hoped for, after loosing all of their opening six fixtures conceding 41 goals in the process.

However, after going down 8-1 to Longlevens in the FA Vase second round qualifying Mark Moore saw enough of "naddy" to offer him a trial in order to break into the Longlevens side.

Moore commented on what he had liked about Soloman "He had alot of heart and work ethic when we faced him, even the likes a Brad Martin got no change from him and when we heard he was available i thought, what have we got to loose?"

After a previous spell with Henbury Soloman was keen to make the step up into the Hellenic Premier Division "My then manager (Ian Logan-Giles) resigned and said he will help me to find a club. After the game, one of the Longlevens coaches was having a chat, saying what he likes about me during the game. I got in touch with longlevens and I was on board. I was happy going to a league higher with a great club that I've heard alot about"

"We will continue to look at him and see how he goes. We arnt a club to turn anyone down who wants to step up and have a go, as long as he keeps working hard and applies himself then he has every chance"

Soloman has international experience so is no stranger to trying to impress "I got my experience from playing against players way above my age which was good cause I was never afraid to prove what I can do. That then landed me into earning to wear the captain band for my country in the under 20's worldcup qualifiers. I then played in the men world cup qualifying matches in 2008 and 2011 and also the carribbean championship. Went on a few trials with some professional clubs which was a great experience also but most important I was a hardworking and committed person to my football"

Soloman told us what he hopes to achieve whilst with Longlevens "My aim for the season is try to be in the team as much as possible, be consistent in every game and do well in the cup competitions"

Soloman is in the Longlevens squad which travels to Glevum Park to face Tuffley Rovers for the second "elglossico" derby this week in the Hellenic Premier League. 7.45pm kick off.