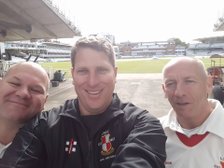 This week the 2s entertained Tiddington 2s at Marlins on a warm muggy afternoon. Skipper Matt Wareham won the toss and inserted Tiddington on a very hard dry deck but with a little cloud cover about, believing the ball may swing. Peter Toovey opened the bowling from the village end and it became very clear that neither opening batsman fancied facing him. Laura Sandy took the new ball from the Cheddington end and unfortunately she missed her line and length and Tiddington got of to a flyer. Returning Huw Robinson was brought into the attack and went on the hunt for wickets, just as I am sure he'll be in the hunt the for job at number 10. The skipper joined the attack and kept a cap on things, bowling 3 maidens in his spell and finshing with 1 for 37. Huw Robinson finished his 10 overs with figures of 3 for 34. Mr 800 (Lee Beesley) joined the attack and bowled his 10 overs finishing with 3 for 21 in partnership the Yogi. Throughout the inning Long Marston took regular wicket but an unfortunate dropped catch when one of the Tiddington batsman which was on zero at the time ( went on to get 80), let Tiddington post 227 for 9 from their 50 overs.
Tea was taken between innings and a large spread from the skipper's Mum, making her Long Marston tea debut, was greatly received by all.
Long Marston started their chase of 227 with Simon Robinson and Paul Marsh at the crease. Unfortunately Long Marston lost regular wickets and only the rear guard action of Simon Robinson was the one positive note in the top 6. Simon Robinson was joined by Toovey at the crease and the pair of them put the only positive partnership together of the innings with Simon Robinson finally falling for 54 and Toovey sweeping his way to 57. Long Marston where finally bowled out for 170.

A huge thanks to Dumpy for scoring, we have Dumpy back in two weeks time.