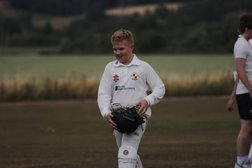 Time To Reflect On Recent Positives

LMCC 2s this week played host to another 1st XI, this time from Gt Tew. Yet another week of shocking availability meant captain Wareham again had to make multiple changes. As is his way, he opted to give youth a go again. In addition to Jake, who did so well as opener at Kimble and Ehsaan Ashraf who also starred at Kimble, we have Alex 'June' Marsh in our ranks and he was promoted this week from our 3rd XI. Matty Wareham won the toss and batted, with no Ehsaan this week Jake again opened, with June batting at three. Wareham opened with Jake on a blisteringly hot day at Marlins, 32.8 degrees at 3.40pm to be precise. Jake was out early, he will learn this is part of facing the new ball and from time to time he will get an unplayable nut or two. Wareham was in prime nick and he breezed to 37 with June looking secure at the other end. Pete Toovey joined June after Wareham was out, and a second 50 partnership involving June was to occur.

June has been seen hitting a ball against every brick at Marlins since he could walk basically, he is genuinely one of our own. He faced what was decent paced bowling and he only gave one real chance in a heartbreaking but brilliant 49. As June faced up, all the phones were set to record this potentially historic moment in June's career. It was not to be a first 50 in 2nd XI cricket for June, but what a knock. Pete batted well but in truth after he and June were out only Geoff and Yogesh provided any resistance. 176 on a baking hot day, a quick Marlins deck and lightening outfield (well done Mr Chairman) was in hindsight well below par. But when you consider the make up of the innings it was considered a good effort.

With the ball were poor, uncharacteristic for the 2s this year but it has to be said from ball one we were not at the races and our opponents got home easily to win. I will not elaborate on the detail, but it was poor. Thanks to Abigail Marsh for scoring, it is a huge commitment and we appreciate it.

The 2s are playing in a strong division, a division we are fortunate to be in following a winter shake up in our favour for a change. Our captains have had a nightmare in that availability at the top end of our club has been poor. However looking into our performances in detail we must take heart from recent efforts. Three lads have gone along way towards cementing regular 2nd team berths at a young age. Matty Wareham will give the juniors a chance when he feels the time is right, well done Matty, you will have a young talented side in the future, we can all see this emerging now. Beneath Jake, Ehsaan and June we have another crop of lads coming through in our 3rd and Sunday XIs. This in addition to a young 1st XI must give us hope of a bright mid-long term future.

Final word though has to be on Alex's performance. Well done mate, the first really notable knock in good standard senior cricket. The first of many I am sure. You may have got 50 if you accepted the cold towel at drinks though mate, we live and we learn...Mum's will always be Mum's, there is a video in circulation that underpins this!!