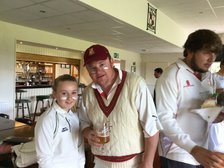 2s Not At The Races

LM at home to Brackley this week and whoever won the toss would bat, even the usual debate on what to do if we win the toss was brief as the pitch was flat and dry, very dry... You guessed it Captain Wareham lost the toss... Brackley who are not doing that well in the league, like ourselves, do have a very good opening pair. Adam Wirth was a team mate of LM players Beesley, Shepherd, Waleed and Zack Wade in the Bucks set up when a junior. He was a lad who was always talented but his frail frame meant he could not hit a ball off the square.. Not now though.. He has worked hard on his fitness and he hits the ball clean nowadays, his six off Yoggy was huge, and his 68 was important. Patrick and Yoggy bowled OK but neither at their best and a large score was on the cards. Myself and Hendo came on and other than my usual two overs of filth at the start we clawed back the run rate from in excess of 6 an over to around 4. Martin Henderson was a long time target for captain Wareham and he has repayed his faith by grabbing wickets since his arrival at Marlins. 5 for 65 on the flattest pitch was a great effort. And although Brackley got 242 in 53 overs it could have been more.
I walked around our ground with Hendo as openers Swamp and The Great Man took to the field...I introduced Hendo to the real Mr Long Marston, Don Winfield and Don was pleased to tell us a few tales of wisdom. Don was in very good form and that was my highlight of the day as he has not been 100% recently. LMCC lost The great man then Wareham and Youngy. It was down to Swampy and the team to dig in and not let Brackley get ten wickets... Don saying "don't let them buggers win" was good to hear and was a reminder of how important our club is to him. Swamp did well and top scored with 46 and it was down to Pat Barry and myself to block for a draw as Don wanted us to do. Patrick batted well and good on him.. The Brackley chat was not the best and they lambasted the format, and bemoaned our tactics. The league table suggests they have not mastered win lose cricket so to lambast a format where lads like Pat learn to value their wicket is a little perplexing.. Not a great day at the office but we did not completely capitulate and I am pleased as Don also was. We do not penetrate with the ball at times, our fielding is inconsistent and our batters gift their wicket at times, if this continues we are in for a hard season. Well done Hendo, swamp and Patrick.. The rest of us need to knuckle down.
Share via
FacebookTwitter
https://www.pitchero.com/clubs
Recent news