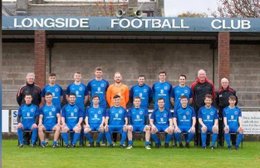 Longside travelled the short distance on Tuesday to play Buchanhaven Hearts in the McBookie.com First Division. The visitors were awarded a penalty when Hastie fouled DARREN BATTY in the box, the striker got up to make no mistake from the spot.

A Marcus Lovell cross for the home side was taken well by Barbour under pressure. Longside doubled their lead in 15 minutes when JAKE WEST took the ball from the half way line and raced forward before clipping the ball over the advancing keeper.

A fine cross from Walker found the unmarked Ritchie but his header was saved by Barbour. The home side made a change when Masson replaced the injured Hastie. Barbour raced from his line to make a fine save as Brown ran onto a through ball.

The Hearts pulled a goal back in 29 minutes when JAMIE MASSON scored with a low drive into the corner of the net from 12 yards. McLeod tried a shot from distance for the home side but his effort went well wide. Longside restored their two goal lead when NICOL DAVIDSON intercepted a poor clearance before showing good strength to squeeze the ball home.

With 56 minutes gone Longside scored a fourth when Davidson found Wallace who in turn played a clever ball inside to LEE LAWRENCE and he scored from six yards. Longside made a change when Murison replaced Mowat.

Hearts scored a second when JAMIE MASSON was again clinical dispatching the ball past Barbour. The visitors scored a fifth when a Lawrence corner caused panic in the home defence and DARREN BATTY was on hand to fire the ball into the roof of the net.