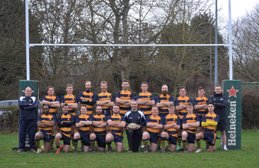 Loughborough dominant as a persistent Ashbourne side keep knocking.

Ashbourne kicked off the game away from the home sides club house as the impressive ‘borough crowd roared. The ball was collected and fumbled until it was eventually cleared to touch, unfortunately passed back inside the homesides 22 metre line resulting in Ashbourne gaining some precious yards. After a successful line out and a couple of failed attempts to break the Loughborough defence the ball was knocked on.

Several phases of play passed of both teams trying hard to create that first opportunity to put points on the board, including a break in the mid field seeing a very questionable ‘forward pass’ disallow a try directly under the Ashbourne posts. Fortunately shortly after Loughborough’s Tom Kirkby slotted a penalty for an away team offside.

The Home side continued the pressure with very impressive handling skills and footwork from the likes of David Appleby and Jacob Abraham, finally leading to a well deserved try by Owen Thomas bowling over the line. 10-0. Ashbourne however came straight back with a sharp break by their man of the match 15. Successfully converted making the score 10-7.

From this point the scoreboard didn't stop climbing throughout the second half as the dangerous duo Appleby and Abraham create yet another try for the home team, once again converted by Kirkby. As the pattern of the game played out both teams continued to trade points. In the meantime however Scott Pears got a yellow card and stropped off the pitch and Lee Gunton managed to trip himself up running along the touchline.

Nearing the end of the second half the Loughborough boys had managed to stretch out a very comfortable lead with the final try dotted down from MOTM Callum Smith.

Loughborough Look to the following Friday night for an away League match against Ashby.