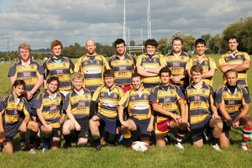 John Litchfield’s 3rd XV recorded an eight try win over local rivals Melton at Derby Road last Saturday in a free flowing epic of champagne rugby proportions. The venues for this fixture, and the corresponding 2nd XV match over the Six Finger border were only sorted out in a bizarre telephone call, coin tossing session between Litchfield the Younger and Fixture Secretary Lee ‘ Barrage Balloon’ Gunton late on Thursday evening. “Normal for Norfolk”.

Litchfield Senior had a much easier job filling the shirts this week, with a few more lads being available than for last week’s League reverse to Belgrave 2s. One player who never managed to fill his own shirt was starting fly-half Callum Smith, who has recently recovered from a debilitating bout of anorexia nervosa in order to take the field. Such was the weakness of Smith that he could not manage to lift the jug of beer he bought following his hat-trick of tries, instead generously donating the whole lot to his team-mates. What a guy. Meanwhile returning to the Boro’ fold, after lengthy spells away up North, were Liam ‘Anteater’ Schofield and Quorn-cum-Toxteth resident George Harvey, who managed to secure himself a last minute pair of horrific lilac boots, complete with Everton badge, to enable him play.

There were also plenty of regulars in the line-up, James Sedgwick, Dean Kendall, Mark Redpath, Matt Jennaway and Ian Jones (more about him later) all having served the 3s well in recent seasons. Former ‘Matt Clay Award’ winner Jennaway in particular sums up all that is good about this team, consistently doing the nuts and bolts work that every side needs to enable the Brylcreem Boys to strut their stuff.

One man who is more show-pony than pit-pony these days is centre (?!!) Gaz Bottomley, who has jettisoned awful hair and eight stones of weight to run around (at pace!) in the three-quarters. Any suggestion that Gaz ‘scored’ a try on the five metre line are grossly exaggerated. As John Turner said on Tour, in Newton Abbot many moons ago, when threatened with a Beer Engine for a similar offence; “Your Honour, I was merely setting up a ruck.” Needless to say, Jim Homer ended up with the Engine...

Anyway, onto the match itself... The morning rain had baited off, a mild breeze was drying things out nicely and the sun was trying to peek its way through white swirls of Cumulo-Nimbus. LRFC Spoilsport Dave Bliss (also sporting swirls of Cumulo-Nimbus) was overruled by the Club Coach and Club Captain and the game kicked off on the 1st XV pitch, meaning the spectators on the patio were well served by beer. Boro’ enjoyed dominance for pretty much the whole first ten minute spell, two tries coming pretty quickly for Schofield and Bottomley as the visitors struggled to come to terms with the pace and accuracy of the home side’s attack. Liam Heaney added a solitary conversion off both posts and the crossbar before plopping over.

Plucky Melton regrouped and started to win the clichés; battening down the hatches, sticking to the task in hand, taking one minute at a time, fighting tooth and nail and thus enjoying the middle spell of the half as they put some decent phases together and chipped away at the 12 point deficit with three well struck penalty goals, one of which was from almost the halfway line.

Back came the hosts, and after a Ben Blowers bust, a Kendall half-break and cheeky offload, right winger Tyrone Bradburn used his outstanding velocity to outflank Melton’s cover defence before rounding the fullback to score under the sticks with a flourish that Sarcens’ ginger clown Chris Ashton would have been proud of. (Apologies to the many talented gingers we have had at the club over the years. And Tubbs.) Heaney converted with ease, this time using none of the woodwork, 19-9.

A scrappy few minutes, with more scrummages than any game needs, ensued with the only entertainment being old head Ian Jones running at full speed to every set-piece, his tiny legs pumping away like one of Fred Dibnah’s little steam engines. The monotony of the grunt and grind up front was broken when local cuddling expert (he available ladies, at reasonable rates) Heaney dotted down in the left corner following a scrum close to Melton’s line. This time Smith’s right boot narrowly missed, 24-9 at half-time.

Captain Litchfield made a few changes at the break, being able to bring on Miss Katie Mcinulty who was eager to impress the on looking Club Coach Leon ‘Once Were Warriors’ Pohe. (If you’ve never seen the film, make it your mission to watch it...)

The second stanza (thanks, Stevo) began with a drop-kick, as they usually do, Smith managing to make half-way (a rarity) but the visitors spilled the ball and Boro’ were immediately on the offensive. A few lads who I don’t know showed some good skills and provided quick ball to be passed along the line. Bottomley, who played for three full calendar years without passing the ball, and Harvey who’s played two years of League without catching it, somehow managed to conspire to put Sedgwick into two hectares of space and he in turn popped up to Smith by the uprights and the wind blew him over the line. The resultant conversion made it 31-9 with only two second half minutes gone.

Back again, pluckily, came Melton, kicking another penalty to keep them in range, and then adding their only try on the hour mark as a few lazy half tackles did not quite do their job. Entering the final quarter the score was 31-19 and both sides were either ahea,d or behind, by only a dozen points.

With the visitors’ older players tiring, Loughborough were able to pull away with four more scores and finish up in the fifties. Before this the senior pairing of Philip Burbidge and Terry Brewin were struggling with the digital scoreboard, Boro’ seemingly being scored at h3 and t3 before either of them located the number 4. Another couple of young Loughborough lads who I don’t know did some more good stuff (not the old, rubbish type of ‘stuff’ that Mark Evans used to balls up) and the last four tries, two from Smith, a second from Bradburn and one from someone even the captain can’t remember, together with two more conversions put an amount of gloss on proceedings. Well, not so much gloss, but certainly more lustrous than the horrible peach walls that the Ladies’ WCs have adopted this season.

Next week is a fixture against Leicester Medics (?)

Captain John Litchfield was a happy man after, commenting; “I’m a happy man.”

Other random quotes in the clubhouse;

“Did you see my kick, Your Honour?” – Gary John Bottomley.
“Maunder, Gaz must be talking to you.” Babbage.
"No." – Ben Maunder.
“Beefy is my hero, my mentor, my idol.” – Macauley Benton.
“Please tell me you saw Gaz score on the five metre line...” – Liam Heaney.
“Please don’t mention my weight loss.” – Callum Smith.
“Please spell my name better than Gunton does.” – Calumn Smythe.
“Chokeslamming has no place in this sport” – Randy Orton.