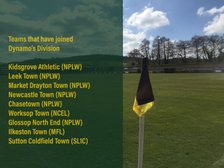 A Look At The Nine New Sides

Chasetown (NPLW): The Scholars finished 13th in the West division finding themselves comfortably safe from relegation but some way off the play-off places. They did however end the season in style by claiming a big scalp in second place Radcliffe FC. Chasetown have been in the same division as Dynamo before with the two sides last facing in the 2017/18 season where the Scholars managed to beat Dynamo on the second occasion after the 0-0 draw between the two earlier in the season. Manager Scott Dundas has been at the helm at Chasetown for 101 matches, picking up 40 wins and 39 defeats in his time as Scholars boss.

Glossop North End (NPLW): Glossop had somewhat of a disappointing 2018/19 season. North End finished 17th [out of 20] and only picked up two home league wins all season. The Derbyshire side also ended the season in poor form - winning just two of their last 10 matches. Glossop have reached Wembley two times, but they were beaten on both occasions in the FA Vase Final. North End lost 2-0 to Whitley Bay in 2009 and then fell to a 2-1 extra-time defeat against North Shields in 2015. Dynamo and Glossop have only met once; that came in the FA Cup Preliminary Round back in 2012 when Dynamo ran out 3-0 winners.

Ilkeston Town (MFL): Since the reformation of the club in 2017, Ilkeston have won back-to-back promotions from Step 6 to Step 4, and will now join Dynamo in the South East Division next season. Town won the Midland Football League in 2018/19, pipping Walsall Wood on goal difference after what was a pulsating title race. The Robins have confirmed that last season’s top scorer, Elliott Reeves will be leaving the club. He scored 36 goals for Town in what was a hugely successful season. Dynamo have never faced Ilkeston since the club re-joined the non-league pyramid two years ago, and it is poised to be a hotly anticipated local derby when the sides meet next season.

Kidsgrove Athletic (NPLW): Kidsgrove finished the 2018/19 season with a flourish - they lost just two of their last 14 matches - and ended in a respectable 10th position. The Grove did the double over Dynamo the last time the sides were in the same division back in 2017/18. They ran out 4-1 and 2-1 winners. On 16th May, the Staffordshire club announced that captain Anthony Malbon had extended his stay with the club. The forward was their leading scorer last season with 21 goals, and he has been a crucial player for them.

Leek Town (NPLW): Leek faced Dynamo twice last season. Both of those fixtures came in the FA Trophy. The sides drew 0-0 at Harrison Park, which forced a replay and Leek ran out comfortable winners in the end, winning 5-2 at the ADT Stadium. The Staffordshire side had a successful 2018/19 – they finished third in the West Division – but narrowly missed out on promotion as Town were beaten 2-1 by Radcliffe in the play-off final. Despite losing that match, Leek had won eight of their previous 10 games. They had a really good campaign.

Market Drayton Town (NPLW): Market Drayton finished their season in 16th but that wasn’t without the season having a good run in the Huddersfield Cup, where they made the final and lost in unfortunate manner on penalties to Whitchurch Alport. It will be a season of change for Market Drayton as Martyn Davies, player manager, stepped down after being a servant of the club for 20 years and scoring an astonishing 296 goals. Drayton have opted to appoint Steve McCormick as first team manager, having already served as assistant manager since 2016.

Newcastle Town (NPLW): Town finished the season in 15th and finished the season in somewhat poor form – winning one of their last seven fixtures of the season. Loughborough have faced Newcastle before in the 2017/18 season where Dynamo got the better of Newcastle, beating them 2-1 on the first meeting before a 0-0 draw at the ADT Taxis stadium. Former Derby County player Robin Van Der Laan is the current Town boss who has already made changes to his backroom staff in order to get ready for the 2019/20 season.

Sutton Coldfield Town (SL1C): The Royals had earnt themselves a playoff place in the 2018/19 season but couldn’t be promoted due to a points per game regulation for promotion, even if they were to win their respective playoff games. They had also made a great cup run in the Walsall Senior Cup, only to be beaten by Boldmere ST Michaels FC in the final. Coming off the back of what has been regarded as a relatively successful season for the Royals, they will be looking to make the same impact going into the 2019/20 season.

Worksop Town (NCEL): Worksop earned promotion back to Step 4 after they convincingly won the Northern Counties East Football League in 2018/19. The Tigers finished eight points ahead of their nearest rivals Penistone Church and only lost four league matches all season. To top off what was a fantastic season for the club, they completed the double by winning the NCEL League Cup, defeating Liversedge 3-1 at the Keepmoat Stadium. Worksop will be coming into the South East Division with a lot of momentum and are hoping to carry that great form on into the 2019/20 season.