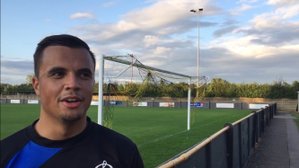 The Dynamo assistant manager looks back at the 2019/20 campaign

BM: A mix bag really. Some really good results, some not so great. But at the same time, it’s another season of stability in taking the club forward. So I think it’s a season of progression capped off with a decent FA Cup run that the club could be proud of.

What moment stood out for you?

BM: The FA Cup games really. It’s just getting a buzz around the club in getting more and more fans to actually come and see that all of the lads play some good football and entertaining stuff. So yeah, for me the FA Cup run because it just grew the club’s fanbase slightly. But at the same time, on that day against Tamworth, there was plenty of fans down there so it’s still good exposure for everyone. A good and enjoyable day.

BM: Yeah definitely. That’s why I say it’s a bit of an up and down because we had a mixture of results until Christmas time in the league. But the last seven games; we’ve gone unbeaten and that’s what we’ve been working towards all season. We didn’t realise how long it was going to take us to be able to get that back after losing a few key people over the summer in pre-season last year.

So yeah it was good mid to end of the season – exactly how we really wanted to start this season. It shows that we did have the right ideas and we did know what the team was capable of; it just took a while.

How was it to get back playing after so long out?

BM: Obviously, I’m still only 26, not far off 27 now so it would be coming up to a prime really in footballing sense but unfortunately the body has put halt to playing as regular as I would have liked to. But in terms of getting back to kicking a ball, it’s something I’ve loved doing since I was a child.

So it’s always going to be a passion and I will happily say that I was immense pride to still be able to perform and give in a couple of games. Show people that I still have the ability there to be able to play, so for me it was fantastic. At the same time; difficult because I certainly felt like the body didn’t move as it used to.

Average attendance has increased this term, would you like to say anything about the support that has been shown?

BM: Well I think that has shown from that little FA Cup run because we have had a group of young supporters and they’ve made the atmosphere absolutely class at games. The lads really appreciate it and it certainly makes it feel completely different to when you’ve got not many there. It gives the lads something to play towards and to show their skills about and actually go and celebrate.

So for me, the supporters should be appreciated. Me and Atts (Lee Attenborough) always talk about the difference it makes to have a few people down there so I think our job is to play a brand of football that people want to watch – and from there – hopefully the fans will start to pick up. Because we’re showing them something that is enjoyable to come and watch from a non-league footballing perspective, but at the same time, they can come in there and get their value and have a good time. And still interact with players which I think is the difference between the pro game.

How important is it to build on what you have built so far?

BM: I just think, if you speak to myself or Atts, you’ll never hear us say anything different that the momentum is key and we never want to stand still. So are we happy from where we’ve brought the club in terms of stability and mid-table aspects; absolutely because they’ve gone from a club where it was potentially looking over your shoulder for relegation to now it’s securing and seeing what we can do.

But at the same time, me and Atts never want to stand still. The next aim is to continue building and see if we can achieve something the club has never achieved.