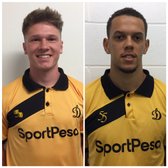 Duo To Stay At Dynamo

The two wingers have re-signed for the new season

Dynamo can confirm that wide-men Josh Riley and Alex Steadman have become the latest players to be retained ahead of the forthcoming campaign.

Riley, who joined the club from Ashby Ivanhoe in 2017, struggled with injuries last season and only went on to make seven first-team appearances, scoring one goal in the process.

After signing mid-way through the 2018/19 campaign, Steadman had an instant impact at the club, netting on his debut at Frickley Athletic before going onto bag four more that season.

The former Gresley forward went onto score eight goals last term, including the opener in an impressive win over Ilkeston Town which was The Moes’ final game before lockdown.

Manager Lee Attenborough expressed his delight with tying these two players down to deals for next season.

He said: “It's great to announce that these two will be with us next season. Steady [Alex Steadman] has an awful lot of experience at this level of football and is always good for 10 goals a season as a minimum when he plays off the left, so he helps to take some of the burden off the strikers. Not only that, Steady is a clever player, he stretches teams with very good runs in behind but also uses it well when we find his feet.

“He's a model non league player if you like. Looks after his body away from football to make sure he stays in shape, trains hard, has a great attitude and just gets on with it. He has a huge amount of respect from the other players and he is a character that very much keeps himself to himself, however, when he does speak up, everybody listens. He gives advice to the young lads in the squad as well which is great for me as a manager and I've no doubt in the next few years Steady will move into coaching. For now though, he is a very important cog in our wheel and it's brilliant news that we've managed to secure him again.

“With Josh [Riley], I feel like I am repeating exactly what I said before last season- it's time for him to kick on! This is a big year for him. He has all the ability and attributes to be a top player at this level and higher. He has had injury problems, but after some specialist treatment, we are hoping that is behind him now. If you ask any of the lads in the squad, they'll tell you Josh is top drawer. We have seen it in spells in games where he is unplayable and we certainly see it all the time in training, but now it's time for him to really make his mark and show what he can do on a consistent basis week in week out.

“Having brought Josh from Ashby and managed him for four years now, I've seen him get technically better but have also seen him physically develop and I'm confident that this year, Josh has the ingredients to make a huge impact for us.”