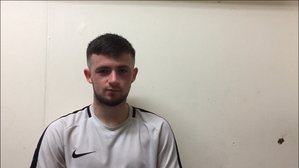 The midfielder reflected on his side’s start to the season

Loughborough Dynamo winger Tristan Matthews believes that his side have started the season really well but now wants them to continue where they left off in the league when they get the green light to do so.

The Moes currently sit in second place in the Pitching In Northern Premier League South East, having won six of their eight matches and not lost in the league since the opening day, but Matthews is hoping to keep building what they’ve begun.

“To be honest, I think we have done really well,” the 20-year-old said. “We’ve won quite a lot of games so far this season. Obviously it’s been put on hold at the moment but when we do get back up to it, we want to keep building on that and try and end up as high up the table as possible come the end of the season.”

This has been Dynamo’s best start to a league campaign for over six years and Matthews praised their team spirit levels and insists that it’s been a vital component of his side’s start.

He added: “If you have got a tight group, you can always do well together because everyone wants to work hard for each-other. We want get as far as possible in the league and win as many games as we can.

“You can only do that if you work hard together and work hard as a team, talking while demanding more from each-other to be honest. We know if we make a mistake, someone is going to be onto us but help us at the same time. So, it’s positive.”