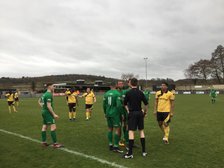 In a series of articles, we are looking back at moments of the 2018/19 season – next up is Brighouse Town at home.

Loughborough Dynamo manufactured a five-star performance in early March, sharing the goals amongst the squad and in style too.

The game came after a dismal February for Dynamo, losing all three of their fixtures in the month before Brighouse visited the ADT Taxis stadium. The visitors’ form was much more contrasting, only losing once in their six previous fixtures and already had one up over Loughborough having won 3-1 in September.

Brighouse imposed themselves onto the game. Zeph Thomas’ strike from 20 yards cannoned off the crossbar to send early warning signs to Loughborough.

Dynamo took the warning then swiftly took the lead. Luke Thorogood, Josh Riley and Karl Demidh all scored to give Loughborough a three-goal lead before Aaron Martin pegged one back before the break.

The high-flying visitors came back out the second half to attempt pulling the game back. Brighouse did a good job of creating chaos after the break with Mohammed Ibrahim’s cool finish bringing them back to 3-2.

Brighouse made a case for why they were flying so high in the league at the time, making the game feisty and hard for Dynamo to break them down in the second half. That was until Ruben Asamoah pounced on a goalkeeping error to regain a two-goal lead and Ryan Robbins calmly slotted away a penalty for the game to finish 5-2.

Brighouse were a side to be reckoned with and went on to win promotion through the playoffs, beating Pontefract Collieries 3-0 on the day however Dynamo were able to produce a seven-goal thriller on the day to see off a brilliant side.