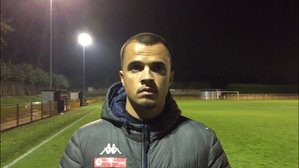 Munn Itching To Get Back Going

We recently spoke to the assistant boss

Assistant manager Brad Munn believes this break in the season has come at a good time for Loughborough Dynamo but admits that it’s also frustrating considering his side’s form before lockdown.

The Moes have had an excellent start to the campaign, winning eight of their 12 competitive matches and Munn is hoping this month has given some of the injured players a chance to recover as well as prepare the squad for a busy period in the campaign once it returns.

The 27-year-old said: ““It is very frustrating in terms of your momentum; everyone is feeling good! But at the same time, it almost gives you a second to reflect on how well you’ve started, certain aspects you can still improve on. It’s fell at a good time for us as we did have a few injuries or lads with knocks.

“It’s almost going to give us time to get the whole squad back together. Me and Atts [Lee Attenborough] still speak and we’ve got no right, in the nicest way possible to be where we are when people think of us as a small club. However, we know what we’ve got and it’s no surprise looking at the performances the boys are putting in to get us to that position in the table.”

Munn’s team sat joint-top on goal difference in the Pitching In Northern Premier League South East before this enforced delay in the season and he insists it’s given them a chance to re-plan after a hectic first couple of months.

“It gives you another opportunity to re-focus and re-plan,” he said. “Yes, it’s a month off but you almost look at it as starting the season again. So, if you can get off to a good start, picking up some good results it puts you back on that swing of momentum, especially in the league.

“I know we had the unfortunate defeat just prior to lockdown in the Trophy but these things happen. The league campaign is what you’re judged on over the course of the season. So, it’s allowed us to re-plan, re-think what our aspirations are, which again we’ll keep in house. But just even more raring to go but we have got something to fight for as soon as it re-starts.”