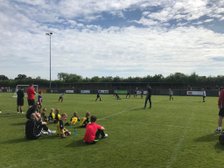 Loughborough Dynamo hosted their annual Junior Football Tournament at the weekend (June 1, June 2). Many different teams from lots of age groups competed on the Dynamo pitch.

Dynamo would like to thank everyone involved including the coaches, players, volunteers and the committees for making it such a successful competition.

Congratulations to all the winners across the weekend – and to also the two Dynamo sides that progressed far in their respective age groups. Steve Warrens U10s won their tournament and the U11 Terminators reached the U12 final. Well done all.