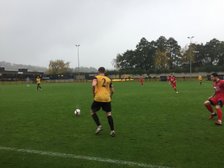 Loughborough Dynamo battled the elements to defeat Wisbech Town 3-0 and remain top of the league table.

The win is Dynamo’s fifth in a row, and it ensured that their unbeaten run at home was extended to 10 games as The Moes continued what has been an excellent start to the season.

The rain fell from minute one to minute 90, with the game starting slowly due to the abhorrent weather conditions, but it was the home side who took the initiative in unique conditions.

Riley put the home side in front on the 25th minute with the help of a big deflection of a Wisbech defender which sent Luke Pearson the wrong way.

To make matters worse for Wisbech, Dean Grogan was sent off for a late and unnecessarily strong challenge on winger Tristan Matthews, making it an uphill climb for the visitors to get back in the game against the league’s in-form team.

The Moes were awarded a penalty on the cusp of half-time which Curtis Burrows dispatched to round off a dominant half of football for the league leaders and compile the misery for the downtrodden Wisbech team.

The weather only worsened as the game went on, however, it did not deter the hosts who went for the throat of their opponents, with a catalogue of chances falling their way.

Goalscorer Riley had another excellent game and he picked out Burrows with a clear sight of goal, but the midfielder fluffed his lines and sent his shot soaring over the bar.

The tenacious Burrows was at it again when he latched on to a delightful cross from Rob Norris, only to see his header same the right post, as Dynamo continued to bombard the Wisbech goal around the hour mark.

That was not it as Karl Demidh found his strike partner Alex Steadman in a similar position to Burrows, with his header flashing just wide of the same post.

It was another test of The Moes’ mental strength with the abysmal conditions, although it was one they passed with flying colours once again, with substitute Daniel Collins wrapping up the game with an excellent finish.

The winger picked up the ball from 25 yards out and curled the ball into the top-right corner to seal the deal for Lee Attenborough’s side, who move to 19 points from just eight games this season.