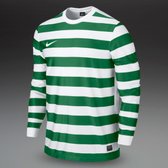 The Club owes its existence to two founder members, Dave Smith and Noel Lovett who were actively involved on an entertainment committee of a housing estate run by the Derwent Housing Association. In 1972 from this committee evolved a Junior Football Club called Derwent Dynamo. The teams initially played in the Coalville Sunday Youth League but in 1975 all teams joined the Leicester Leagues. At the beginning of the 1990/1991 season the Club changed its name to Loughborough Dynamo Football Club and joined the senior sides to play at Nanpanton Sports Ground, Nanpanton Road, Loughborough.

The Junior section retained its own club colours of Green/White hooped shirts, white shorts and socks throughout this period.

The Club is well known in the Junior circles for its Annual Summer Cup an eleven-a-side and mini soccer competition for all Junior age groups with teams entering from all over England.Teams have travelled from as far afield as Sheffield, Manchester and Bristol to take part.

Many teams have had successes over the period as Loughborough Dynamo Junior Football Club, the most notable to date being the treble by Brian Slaters Under 16 team in the season 2000/2001 and more recently the success in the 2009/10 season of Grant Ryder's Under 17s who were runners up in the LYL premier division along with a League Cup and County Cup double to cap a cracking season.

In 2009 it was decided that all the junior teams would change their playing colours to the gold and black of the seniors in order to create better links with the senior section and to adopt a consistent identity across the whole club.