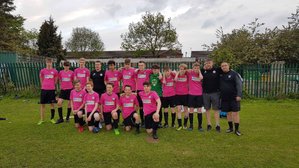 Another 3 points for the 15's and Promotion!!

The pinks are in a good run of form and again started the game on the front foot and pressing Hepworth from the off.

The pressure told when 10 minutes in Charlie chased down a ball from Kev, their defenders tried to clear but Charlie just kept going eventually taking the ball from them and forcing it over the line to make it 1-0.

Hepworth did however have a great chance to equalise when their striker broke through and rounded Ollie but Lucas and ash kept the pressure on him and he hit his shot wide, from then on the Pinks didn't give Hepworth anymore chances and when a great free kick into the area from Josh Stockwell landed at the back post Taylor was there to smash it home into the roof of the net with a brilliant finish.

2-0 at half time and the second half continued the same way.

5 minutes in Charlie met a long throw from josh into the box and he cut the ball back for the in form Alex grant to smash the ball through the crowd to make it 3-0.

The Pinks pressure was relentless and they should've scored more but they got a fourth when Pickles pass to Charlie was flicked through to Kev who ran onto the ball took a touch and buried it past the keeper into the bottom corner. Another great finish from him.

From the goalkeeper to the forwards the whole team did not stop yet again, to the final kick their effort was outstanding and with the Hepworth manager informing us at the end he was now going to forfeit his next game it confirms the lads promotion.

Congratulations to them all.

Captains MOTM tonight went to Josh Stockwell who is still getting back to full fitness after a bad knee injury but he was brilliant in central midfield both defending and pushing us forward at every attempt.

Coaches MOTM was another tight one with Lucas and Isaac deserving a mention however it was their defensive partner Ashley who took the award with a faultless display all night long.