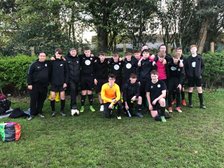 U16's finish the season with a draw

Brighouse the visitors to Dartmouth Park

The pinks started the game at a great pace and within a minute were 1-0 up when some great play down the wing saw the ball crossed in and Joey was there to smash the ball home at the far post against his former club.

Then 10 minutes later a great ball over the top by ash was met by josh who powered a shot on the angle past their keeper to make it 2-0.

We really then just dominated the half making chance after chance but we just couldn’t finish them off.

The second half started as the first did and we kept creating but Dewsbury pulled one back from a rare attack when the defence went to sleep.

However we went 3-1 up 5 minutes after when a worked on set piece paid off and josh powered home a bullet header at the far post.

After that dewsbury pulled 2 goals back from 2 free kicks and although our lads kept pushing we couldn’t find the winner josh had his hat trick goal ruled out for offside which was the closest we came.

The point could still be enough to guarantee div 3 football next year but the lads really deserved so much more on the last game of their season.

Captains motm went to josh for a great all round display and his 2 good goals.

Coaches motm went to Lucas hairyes who is getting better every week now and his deliveries into the box are a great weapon for us to have.