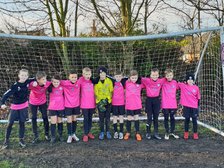 Up Hill Battle Reaps Rewards for U11 Whites

Another week, and another away fixture for the Whites squad who travelled to play their division 4 opponents, Pudsey Juniors, with the Pinks at full strength for the fixture.

This is the squads last fixture before they head off on tour to Silloth next week and they were determined to sign off on a positive note.

Following a slow start last week against Tingley, the Whites squad were straight out of the traps this morning and within the first 5 minutes Ryan dinked a ball over the opposition defence and Gustav raced clear to slam the ball home to give the Pinks an early lead. Ryan is excelling his role further up the pitch and picking up a very steady stream of assists – as always he was ably assisted by Alex who broke up play. Pudsey were playing some nice football and penning in the Pinks who at time struggled to clear the ball away up a steep gradient. The pressure told as Pudsey drew level.

This only spurred the Pinks on, Lucas introduced from the bench really made an impression in the game. He picked up the ball deep in the opposition half and made his way into the box, as he dropped a shoulder left he spun back round to his right, bamboozling the two defenders; before laying the ball across for Gustav to finish well – it was a really well worked goal from the Whites squad. As confident grew Oliver collected a long ball deep in the Pinks own half, before playing a neat pass into the wide area. Dan burst clear of his marker, squaring Gustav whose powerful shot was parried by the keeper before being turned home by Omar. Pudsey were still applying lots of pressure but the Pinks were proving to be resolute in defence, with Oliver Brooke and Dylan Allen excelling in defence and Josh mopping up well. Following another spell of pressure, Charlie launched a long goal-kick up the field, which set Omar clear of the defence to grab his second goal of the game.

A really positive half saw the Pinks take half-time with a dominant lead, and looking forward to playing the second half down the hill. Dan and Gus’ pace in the first half had been crucially important in allowing the Pinks to stretch the opposition. They started the second half very positively, with Dylan forcing himself onto the opposition early in the second half, and playing a crucial role in retrieving the ball against the opposition number 9 who was a very talented player; but was well marshalled by Dylan throughout the game.

The early second half pressure told, Gustav broke down the left before firing a cross across the area, although it was missed by the two Pinks players attacking the 6-yard area, it fell to Lucas 15 yards out who rifled an unstoppable drive into the top right hand corner; a really wonderful finish. The favour was returned again by Lucas who set Gustav clear into the box before he rounded the keeper to complete another fantastic hat-trick in what has been a remarkable season for Gustav.

Pudsey had played really positive football throughout the game and began to dominate the last quarter, against the visibly tiring Pinks. As a corner was fired into the near post, a goalmouth scramble saw Pudsey pull a goal back. This was quickly followed by two more strikes for the opposition to set up for a slightly nervy finish. The Pinks however held firm at the back.

The story of this game has to be about the 3 players who joined the squad last Summer. Lucas is undoubtedly playing his best football of the season and growing in confidence week on week, putting in another season best performance today. Dylan was, as ever, outstanding again marshalling a very tricky opposition well. Since joining in the Summer, Dylan has become an absolutely integral member of the squad; and the coaching team would really struggle to find a game all season where Dylan hasn’t scored a minimum of 8/10; he really is Mr Reliable and has delivered a consistently high level of performances all season.

In any other week, Lucas and Dylan would have walked away with the MOTM award; however, there is no other way to describe Oliver Brookes performance today other than simply outstanding. Oliver joined the Whites squad from the Blacks at the start of the season and has really benefitted from the squad moving into higher divisions throughout the season and is forming a formidable partnership with Josh at the back. His ability to spot danger and read the game is exemplary and once again today he made a number of perfectly timed tackles in his own box to keep the opposition at bay and protect his keeper. Week on week Oliver continues to improve and impress his team mates and coaches – keep it up Oliver!