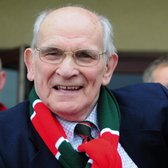 A very bright light went out with the sad news that after a brave fight against illness our former President, David Shane, had passed away.

A very bright light went out on Tuesday 19th August with the sad news that after a brave fight against illness our former President, David Shane, had passed away. At this very sad time our thoughts and prayers are for Glen, his daughters, grandchildren, family and friends.

For more than 60 years David Shane was quite simply Luton RFC’s outstanding personality, on and off the pitch. Joining in 1947 after service with the Royal Navy, he made an immediate impact and went on to represent the Club with distinction for many years including a period as captain when he proved to be a successful an inspirational leader. After his playing days drew to a close David continued to serve the Club with great distinction filling many of the senior offices. Most notably he served as President and as a Trustee for more than 30 years and on standing down as President he was made an Honorary Life Member – never was such an award more deserved.

Magnificent though his achievements were in filling his many official roles over more than 60 years they only tell part of the story about his enormous contribution to the Club. It was also about the way he behaved and the example he set for all. Good company, intelligent, highly articulate, energetic with a great enthusiasm for life, particularly rugby, David Shane was a wonderful ambassador for Luton RFC. One of his great pleasures was supporting the Club both home and away and being a natural, articulate and extremely funny speaker he entertained many a pre-match lunch with his fund of stories, even though his theory that the better the lunch the worse the game that followed was eventually shown to be flawed!

In committee he always dispensed wise counsel and never shied away from taking difficult decisions that were for the benefit of the Club. Always to the fore, his foresight and hard work over very many years was a major reason the Club was able to migrate successfully from a post-war nomadic existence in Stockwood Park to Wood Meadow and then on to our splendid Newlands facilities that we enjoy today. That is his lasting legacy and one of which he can be very proud of.

In recent years, despite his failing health he never lost his love and enthusiasm for rugby in general and Luton RFC in particular and remained a stalwart supporter of the Club. David Shane was a very good person and a great rugby man – we shall not see his like again. One of the good, very good guys.

The funeral will be held at 2:00pm on Wednesday 3rd September 2014 at Garston Crematorium, Watford.