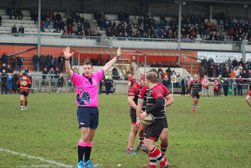 Another disappointing day for the Severnsiders on the road, the visit to high flying Bridgewater saw Lydney give another Jekyll and Hyde performance. After comfortably controlling the game in the first half gave the Supporters had high hopes for an away win but the Severnsiders lost the skill and intensity of the previous week in a poor ill-disciplined second half
The Severnsiders were on top from the off attacking well and within three minutes a Joe Hamlin penalty had the Severnsiders 0 – 3. More good Lydney pressure should have seen another score, from a good kick thorough the ball landed in the try zone only to see it bounce back into touch before Tai Lakabuka could touch down. Bridgewater then immediately got back into the game with a penalty kick for 3 -3. However, the Severnsiders continued to dominate the half and a strong run from Mike Massey saw him eventually to off load to the impressive Alex Nelmes to cross the whitewash for well-deserved try 3 – 8. The Severnsiders continued to dominate with a spell of forward pressure and some good drives saw them unlucky not to get a further score when from a kick through another unlucky bounce saw a score missed on the try line. With Dave Bennet starting to dominate the line out they upped their game but despite more pressure too many mistakes by the Severnsiders saw them spurn further chances and the half ended 3 - 8.
Playing with the wind in the second half Lydney started an error ridden half which became very ill disciplined following numerous penalties awarded by the official. Bridgewater took their chance and Matt Ranson scored a converted try to give the home side the lead at 10 – 8. Lydney still looking the better side soon were awarded a penalty which Joe Hamlin knocked over for 10 – 11. Second half injuries did not help the Severnsiders, the tough tackling Harry Brown left the field as did Mitch Baldwin and the bench was emptied. A spell of Bridgewater pressure saw the Severnsiders putting in some good tackles and manged to see off a strong attack, however from a restart on the 22m line the ball was charged down and James Collings scored for the home side to lead 17 – 11. The Severnsiders tried to battle back but continued their error ridden afternoon and after numerous penalties James Mainwaring was given 10 minutes in the bin. Despite 14 players the Severnsiders continued to create chances but far too often fell fowl of the referee and a frustrated Sam Arnott was yellow carded to leave Lydney with just 13 players and all hope of a win disappearing. Back to 14 players the Severnsiders continued their error ridden afternoon in what was a very poor second half display given the heroics of the previous week and match ended 17 - 11.
Coach Dave Emery was very disappointed “Our away form is killing us this season, the performance in the second half was simply not good enough, we had a good game plan and dominated the first half but the total lack of discipline in the second half cost us the points today. Yes, we have numerous players missing with injuries but this side is good and should have secured a win today”