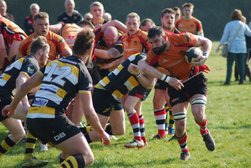 Lydney recored one of their highest away points tally in a League fixture with a totally dominate display. Coney Hill, who are encamped at the foot of the league and having a challenging season, fielded a big pack for this local derby fixture. However, the pace and intensity of the Severnsiders ran the hosts ragged all afternoon on a dry sunny afternoon, just made for running rugby.
Cheered on by a large traveling contingent the Severnsiders were rampant and a clever kick through by Sam Arnott saw Conner Mills touch down after just five minutes and the rout had started. Lydney’s Nathan Tucker knocked over the extras for 0 -5. Immediately from the re-start, the Severnsiders pressed hard with their forwards making some punishing runs, Joe McClean made a break in midfield beating numerous tackles to score under the posts, with Tucker adding the extras it was already 0 – 14 after just 10 minutes. There was no let up for the home side, Lydney dominated possession and further tries from Matty Williams and Mike Massey both converted by Tucker had the away side ahead at 0 -28 after just 25 minutes. Again, from the kick off Lydney gather the ball and a good set of forward drives eventually sees Harry Brown crash over for another converted try 0 – 35. The pressure was relentless and in an effort to clear their lines Coney Hill had two kicks charged down and Callum Thompson pounced to score, with the try converted by Tucker the score extended to 0 – 42. The onslaught continued and Matty Williams scored again followed by the best try of the day from Joe McClean where McClean and Tucker exchanged numerous passes to evade the Hill defensive cover, both tries converted by Tucker gave an incredible half time score of 0 – 56
The Hosts needed to regroup or it would be a very long afternoon. The Severnsiders lost a bit of intensity in the second half being so far ahead and spurned some easy opportunities by over-elaborate play. However, it was not long before a good interchange of passes by forwards and backs saw Tai Lakabuka outpace the home defence and run around to score under the posts, which again was converted for 0 – 63. The hosts on the hour mark finally created a chance when former Lydney player Andy McCrae scored for 5 - 63. The onslaught soon resumed and the hard-working forwards Harry Brown and Callum Thompson both got their second tries to stretch the score out to 5 – 77. It was difficult for the Severnsiders to keep the momentum and with so much possession a few errors crept in to cost further scores. With their big pack now very tired a poor scrum from the hosts saw Matty Williams pounce on the loose ball to scamper over for another try. Hill did manage a final score deep into injury time but did little to make the final score of 10 – 82 look any better.
Coach Lee Fortey was delighted with the performance adding “very pleased, you can only play what is in front of you and we did just that. We kept to our plan of high intensity play with pace, to move the ball at every occasion and deserved our big score. It was difficult in the second half to keep the same intensity being so far ahead but we continued to score some good try’s. We are playing great rugby now and that’s 4 wins in a row and I will be challenging the players to win our final two games”