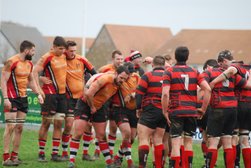 A match played in gale force winds and a heavy pitch made running rugby very difficult but it was the Severnsiders who managed the conditions better and ran out worthy winners. Lydney were without some key players in this rearranged fixture however the reshuffled team dominated the home side for most of the 80 minutes.
Playing with the wind advantage in the first half Lydney looked to dominate the opening encounters but for the opening first 15 minutes both sides made numerous errors just trying to get used to the tricky conditions. The Severnsiders started to manage the game better and their forward pack were making good ground with some strong driving play on numerous occasions. With the wind making front call line outs virtually the only option, Dave Bennet began to dominate both Lydney and the oppositions throws. It was from a line out and good phases of play saw the backs move the ball wide and Alex Nelmes was on hand to outpace the Cullompton defence for the opening score of 0 – 5 after 25 minutes. Lydney gathered the restart and some good driving runs from the forwards saw them once again deep in the home sides half. A further good forward drive saw Matty Williams quickly spin the ball out into open play and the very impressive second row Callum Thompson popped up out wide to crash over for the second try. With the wind now at gale force conversions were a lottery so the score moved to 0 – 10. The Home side did react from going two scores down and got a try of their own when prop Tom Parker went over after a strong forward drive ending the half at 5 – 10
Lydney certainly would need to up their game in the second half as were now playing against the strong cross wind. This however was not the case and a sloppy opening 5 minutes gifted Andrew Hayball a try to tie the scores at 10 – 10. This early set back galvanised the Severnsiders into action, with the hosts offside the resulting penalty was kicked to the corner, Dave Bennet took another line out and from the resulting forward drives hooker Nathan Ford crashed over for 10 – 15. The Severnsiders were gaining the upper hand but had to work hard for territory against the wind. The backs were now starting to see gaps and good runs from Tai Lakabuka and Alex Nelmes were generating huge territorial advantage. The hosts were creating very little but did get a penalty just inside the Lydney half, with the wind behind they opted to kick and closed the gap to 13 – 15. From the resulting restart, the ball easily crossed the 10m line but was blown back into the Lydney half, the alert Sam Arnott caught the ball and made good ground into the opposition half, moving the ball through the backs the pacey Tai Lakabuka cut through a number of tackles to score under the posts, Jack Sterry manage the only conversion of the day for 13 – 22. The Severnsiders, who were winning an abundance of possession to control the game should have run in further scores. The home side lacked ideas but any attack was met with some solid Lydney tackling and good defensive lines. With 10 minutes left the whole Lydney side were now combining well and moving the ball around, another superb line from Alex Nelmes saw him carve through the home defence and offload to Callum Thompson for his second try giving a final score of 13 - 27.
Captain Sam Arnott added “A great result and a good 5 points. Cullompton although in relegation trouble certainly came out to give us a game. Given the appalling conditions it took a good disciplined performance for us to get the result. With a reshuffled team, we kept to our game plan and managed things well however disappointing to give away two sloppy tries’. I was very pleased with the second half performance as the home side had the advantage with the strong wind, so to outscore them was very pleasing and a good performance from all 18 today”