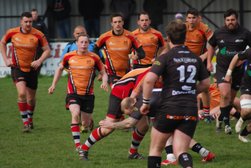 A bitter easterly wind greeted the Severnsiders on a trip into Cornwall to play Launceston where a win would extend their unbeaten sequence to six. The hosts were looking for victory to keep their league title and automatic promotion hopes alive fielded a big side both in forwards and backs. It was the Cornish All Blacks who proved the stronger cheered on by an expectant home crowd. A large contingent had also travelled from Lydney for this final game of the season but the hosts big side were clinical punishing many Lydney mistakes with their driving forwards and free flowing backline. The match started evenly but on seven minutes it was the Severnsiders who opened the scoring. A line out on the 22 was lost by Lydney but Dave Bennet managed to gather the loose ball and storm his way through a couple of tackles for a good try and 0 – 5. From the restart, the Severnsiders were sloppy and conceded a penalty which Glen Coles knocked over for 3 – 5. The hosts kept the pressure on and Lydney started to make some errors, from a poor kick Launceston gathered the ball and their backs ran a good move to score and unconverted try 8 – 5. Lydney were unlucky at scrum time being panelised on numerous occasions when it looked like the hosts front row were at fault. The home side took full advantage, from a scrum on the 5m line, Andy Knight drove over to score for 13 – 5 after 30 minutes. With half time beckoning Lydney again lose the possession from a very poor kick which see the hosts run it back to score for 18 – 5 at half time.
The Severnsiders regrouped at half time and came out strongly, immediately having the hosts under pressure. Some good driving play from the forward pack saw the ball moved out to the backs and centre Henry Sleeman crashed through the home defence to get the Severnsiders back in the game at 18 – 10. Lydney sensed a possible away win and piled on the pressure desperate for another score. Moving the ball around and stretching the opponents with good runs from Tai Lakabuka and also winger Conal Mills a score looked about to come when one poor pass was intercepted by the hosts who ran the length of the pitch for a converted try and 25 – 10. The game looked gone but the Severnsiders dug deep, a good move by Lydney’s man of the match Dave Bennet saw him chip the ball thorough, regathering himself only to be tackled deep in the 22. The hosts conceded a penalty from the breakdown, the resulting line out was won by the Severnsiders and substitute Jack Knox drove over to give Lydney hope at 25 – 15. However, it was to be the home sides day and their determination combined with the Severnsiders error ridden afternoon gifted them two more tries in the closing stages for a final score and deserved win of 37 -15.
So Lydney close the season seventh in the table, but for a poor start and losing a few tight games they would surly have been challenging for promotion. A recent run of five wins in a row will give the side confidence, providing they can keep the squad together, even add a few players, for sure they will be title contenders next season.