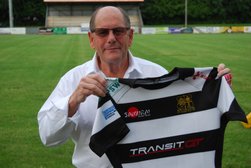 Following the sad loss last season of Derek Pomeroy, Lydney RFC are proud to announce Joe Betty as the new Club President. Joe a lifelong supporter of the Club takes up his position with immediate effect ready for the new season. Whilst being a Sponsor he has also held numerous positions within the Club as vice Chairman, committee member and other positions within the Supporters Trust. He was also part of the team that were instrumental in installing the Flood lights at Regentsholme.
Joe is looking forward to his new challenge and said ‘I aim to carry on the great work of my predecessor in helping the Club to grow through challenging times and hopefully it will be a promotion winning season. I look forward to meeting our Sponsors and Supporters once again as their kind help and energy is the backbone of our Club.’
With Lee Forty continuing as Head Coach the Severnsiders are looking for a fast start to the Season, They kick off with two friendly fixtures at Regentsholme on August 22nd against Matson and 31st with Dowlais visiting before starting league fixtures with two away games.