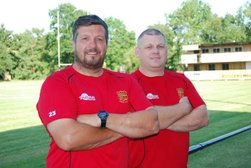 Lydney RFC are pleased to confirm Lee Fortey will again be First team Head Coach for the 2019/20 season. Fortey will be supported with the experience of Dave Emery as a assistant Coach and also a backs coach currently being recruited. The Severnsiders will run two senior sides and also a new Colts team manged by Gareth Williams with Paul Roberts acting as a transition coach to help bring the youngsters through into senior rugby.

Director of Rugby Lee Fortey said - “I am already looking forward to the challenge that next season brings and gives us a great opportunity to continue the excellent improvement made this year. I’m really excited by the prospect working again with a talented squad of players, we have a few experienced heads but have some young exciting prospects that will continue to develop in the 1st Team squad. Once the players adapted to our new style of play we made real progress at the end of the season winning 5 of our last 6 games. Our target must be promotion and based upon our end of season form this is a very realistic challenge. Training will start in early July to prepare for our 2019 South West 1 West campaign”

Head Coach Dave Emery added – “We are looking to assemble a larger squad to try and cope with inevitable injuries that really affected us this season. We are working hard behind the scenes to try and bring in a few new players to strengthen the squad. The younger players have really stepped up and will be a core part of next seasons side. Unfortunately, we will lose a few players from our squad but we already have some players interested in joining as will be critical we get off to a good start. I would like to hear from any interested players who want to join a club offering top rate facilities and have one of the best grounds in the county”