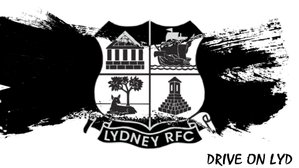 With the Severnsiders first team fixture postponed and an International weekend, a good crowd still turned out at Regenstholme to watch a friendly fixture between the United side and a slightly under strength Cinderford Stags
The opening exchanges saw both sides trying to move the ball on a very windy afternoon. Cinderford started brightly but the home side started to use the wide pitch and were creating some gaps. Alex Nelmes was linking well with his backs and stated to create some good opportunities. It was from a break by Nelmes saw the backs move the ball well and Jack Sterry cut through to opening the scoring. Sterry converted to give the United side a 7 – 0 lead. More good work and pretty much a copy of his first try saw Mitch Baldwin out pace his opposite man to slide over for the second try of the day. A further Sterry penalty gave Lydney a 15 – 0 lead. With 20 minutes gone the Lydney pack were in the ascendance creating lots of ball for the backs to exploit. Lydney continued to look dangerous and it was the impressive Alex Nelmes who then scored a try just before the break for 22 - 0.
Cinderford regrouped at halftime and playing down the slope came out firing for the second half. They were soon camped in the Lydney half and a good move between forwards and backs saw Mike Baldwyn score a converted try for 22 – 7. The big Cinderford pack now dominating the middle of the field were creating loads of chances but stern Lydney defence saw them held out on numerous occasions. Despite all the pressure it was Lydney who scored next against the run of play to extend the lead to 27 – 7. Cinderford continued to dominate the closing stages and a god move saw Joe Park Davis cross to give a final score of 27 – 12 in a very entertaining game.