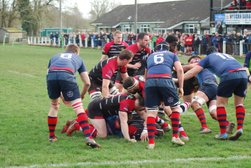 A glorious spring day welcomed a large crowd at Regentsholme hopeful of some entertaining rugby and Lydney doing the double over Devonport, having won away earlier in the season. The Severnsiders duly got a well-deserved win but the game lacked fluidity, turning into a stop start affair not helped by lots of penalty awards from the match official. Devonport who are riding high in the table looked again to provide a tough afternoon for the hosts with their large pack. However, spurred on by some recent good performances the Severnsiders were looking for three wins on the spin started much the brighter dominating the opening quarter. Spending large amounts of time in the opposition 22 saw a good run from Tai Lakabuka brought down just short, on recycling the ball big John Barker crashed over only to drop the ball in the act of scoring. From the resulting scrum Devonport failed to clear their lines and the Lydney backs ran the ball back for Henry Sleeman to score a good try out wide. With the conversion missed Lydney were given offside at the restart and Richard West knocked over a long-range penalty for 5 – 3. The half then got scrappy, the Severnsiders still dominate but play broken with numerous penalties being awarded. With the official losing patience Devonport have a player sent to the bin and the hosts seize the advantage, from another good turnover Mike Massey drives through the Devonport defence, recycling the ball its spun out across the backs and young Henry Sleeman powers over for his second try of the day, Nathan Tucker added the extras for a half time score of 12 – 3.
Driven on by captain Sam Arnott the home side start to dominate again as the second half resumes, turning over a Devonport scrum sees Matty Williams run the ball to the blindside, offloading to Tai Lakabuka running at pace who avoided several tackle attempts before scoring, Tucker added the extras for 19 – 3. The game continued to be a scrappy affair and from one of numerous penalties Nathen Tucker added another three points for 22 – 3. The official now handing out a number of yellow cards saw both sides with 14 players. From a ruck on the 22m line the Severnsiders turn another ball over and Jack Sterry appears with the ball on the blind side and runs unopposed to score in the corner, Joe Hamlin added the extras for 29 – 3. Playing injury time and Lydney now down to 13 players saw Devonport get a rare attack to score a converted try for a final score of 29 – 10.
Rugby Director Dave Emery added “A great result and a well-deserved win, that’s three in a row now and the challenge is on to go unbeaten for our remaining games. We played well in the first half adapting our game to the stop start nature and only conceding three points was a real positive. We dominated the second half, created loads of chances and got the crucial scores. I felt all 18 played well today, we were always in the ascendance and controlled the game”